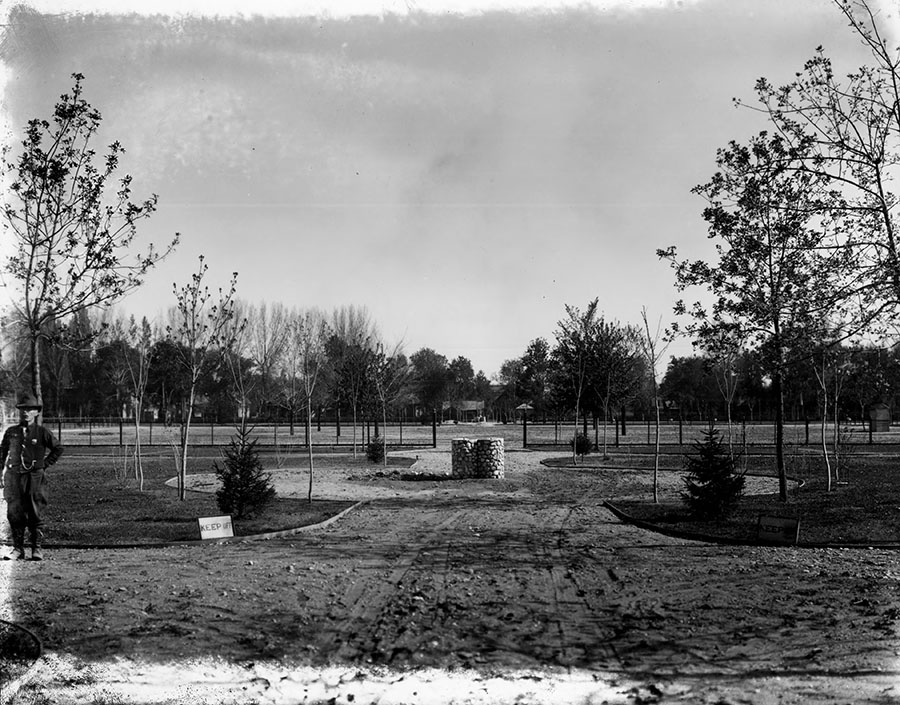 The Progressive Era spanned from 1890 to roughly 1920 and was a time of reform and social activism.  Progressives were mainly white, Protestant, and members of a growing “new” middle class, who earned their wealth as a result of America’s rapid post Civil War industrialization.

By the end of the nineteenth century, Progressives in Utah and the rest of the United States sought to overcome the adverse effects of industrialization, unrestricted urban growth, and public health and environmental issues that accompanied these changes. In short, many activists worked to address the severe political, social, and ecological consequences of Gilded Age policies and practices.

Unfortunately, these reform projects often benefited more affluent neighborhoods first, which left the impoverished, immigrants, and people of color exposed to severe environmental health hazards. In Utah, Progressive Era activism improved sanitation in Salt Lake City, which included upgraded water systems, sewers, and the paving of roads. The down side of this was that it took awhile to get to the west side neighborhood.

The push to establish and preserve public lands was one Progressive Era program that gained national popularity.  In Utah by the first decade of the twentieth century, the creation of national forests, to protect public lands that had been largely deforested, overgrazed and prone to flooding, was well received by the Utah’s citizens. Through the work of conserving and preserving public lands, Utah’s water quality was much improved. The care of public land and amenities also extended into building and designing more healthier and more aesthetically appealing public parks. The movement to create a grand and more formal layout of cities was known as the City Beautiful Movement.  The goal was to build paved roads with curbs and gutters, and grassy boulevards with wide thoroughfares, and to build generous open spaces in America’s densely populated cities. To this end, after the 1890s, SLC constructed meridians on 600 East Street that led to the eastern entrance to Liberty Park (designed and layout in 1883-1885), to 800 East and portions of 1200 East, along with other streets. Salt Lake Progressives were also thinking about the impoverished west side dwellers and laborers too. The development of Pioneer Park after 1898 represents another effort to incorporate Progressive Era reforms but this time in the oldest most industrial part of Salt Lake City.

On July 25, 1898, member of the First Presidency of the Church of Jesus Christ of Latter-day Saints, George Q. Cannon, dedicated the old fort block as a municipal park.  LDS Church President Wilford Woodruff, offered the keynote address during the dedication ceremony.  Several state, municipal and church leaders sat with Woodruff and Cannon on the temporary stage, including Congressman William H. King, LDS Relief Society President, Zina D. H. Young, and women’s rights advocate and editor of the Woman’s Exponent, Emmeline B. Wells. This decision to create a public park with the support of prominent religious and government leaders, at least for a time abated the prior calls from sundry business leaders to turn the open space into something else.

The surrounding Pioneer Park neighborhood would was one of the last areas in the city to have roads paved, or the other prior mentioned improvements. The Pioneer Park was landscaped in 1903, and in 1909 a newly formed Parks & Recreation Association of Salt Lake City lobbied and fund-raised for playground equipment. It appears that Pioneer Park, surrounded by Salt Lake City’s industrial squalor, urban poor, and plenty of immigrant children, was the first city park to have play equipment. The progressive Parks & Recreation Association sought to improve the lives of poor immigrant children who lived and played in Salt Lake’s west side.

Not all of Utah’s Progressive Era reforms sought to improve the aesthetic appeal of the city. Many reformers hoped to eliminate or at least control the vices that many Progressives believed contributed to corruption and social problems.  These “ills” included prostitution and alcoholism among many others. Prostitution became a concern among many Salt Lakers who incorrectly concluded that most of this activities were confined to East Europeans, Italians, Greeks, as well as Asians and other immigrants, rather than the city’s Euro-American population.

In fact, as historian Dean May has shown, just three days before the ratification of the Utah State Constitution, police officers arrested Mr. John Thompson, and Ms. Ada Smith for their participation in a prostitution ring ran out of a west side hotel located on 300 South. May explains that “Thompson was arrested for frequenting, Smith for staffing and the proprietor, for running a house of ill repute.” Thompson and Smith were not the only ones arrested in the city for their participation in prostitution.  When the police brought the pair to the jail for booking, they joined Jennie Smith and Clara Cox, who police arrested previously for prostitution.  According to May, Jennie Smith and Cox were apparent “regulars in the particular night court…” and that they “left the usual amount for their appearance.”  All those listed where white.

Police arrested so many people for prostitution, city officials took steps to eliminate or at least control the practice. Notably, city leaders, law enforcement, and citizens blamed females for the continued practice of prostitution rather than hold men accountable for their solicitation of paid sexual favors. One way that city officials hoped to regulate prostitution was to select a section of the west side neighborood, where sex workers could legally, and in a controlled setting, conduct business. Fifteen years after police arrested Thompson, Smith, Smith, and Cox for prostitution, lawmakers approved the construction of what became known as the “stockades.” The “stockades” which were built and used between 1908 and 1911 were two adjacent buildings with a total of 100 or more small isolated rooms, surrounded by a tall fence, and located between 100 and 200 South and 500 and 600 West. The completion of the stockades officially established SLCs new and controlled “red-light” district.

In the case of Salt Lake City, leaders confined the activities of the “oldest profession” to the woebegone, ethnically diverse, and rough-and-ready Pioneer Park neighborhood.  To this end, Salt Lake City Councilman L. D. Martin justified his support of Mayor John S. Bransford’s wholesale move of the “restricted district,” to the west side when he said:

“We found that most of the better class of residents were leaving the vicinity anyway, because of the influx of Italians and Japs who live in that neighborhood, and we concluded that it was a disgrace for [white] citizens of Salt Lake City to go to the theater or along the main business streets, [Main and State Streets, while] having vice flaunted under their noses” (Salt Lake Herald-Republican, 10 December 1908, p. 12).

Salt Lake City officials built the “stockades” around three vibrant micro-communities that were known then as “Little Italy,” “Greek Town,” and “Japan Town.” Many of the surrounding residents were naturalized citizens. The prostitutes who worked within the red-light district paid the city a monthly fine (or rent) to use the stockades. West side bordellos—or brothels—both before and after the Stockade experiment, were based in boarding houses and small hotels primarily on West 200 South and West 300 South. It was only due to the insistence of the U.S. Army during World War II that these dispersed and often hidden businesses were systematically shut down by the city. However, open street solicitations and car pickups for sex workers along 200 South remained a well-known and accepted feature of Salt Lake City life into the mid-1970s.

Salt Lake City officials built the “stockades” around three vibrant micro-communities that were known then as “Little Italy,” “Greek Town,” and “Japan Town.”

The efforts by city officials to confine prostitution to the west side did not work.  In fact, the plan fell apart roughly three years after it was set into motion. Many people refused to use the stockades because of the social implications they faced by engaging in prostitution. There was however a demand for sex workers. For example, many young male immigrants arrived in Utah to find work. Their families expected them to send money home to contribute to their sister’s dowries (a collection of valuables sometimes including household and soft goods, money, and even property). The families expected their sons to not marry until they returned home once the doweries were complete. Thus, some of these men paid for sexual relationships with prostitutes. Additionally, based on arrested records from the period, there were often more white offenders as there were immigrants or people of color.

Another factor that contributed to men’s decision to hire sex workers was the limited number of immigrant women. Discriminatory immigrant laws also restricted single women, wives, and children from immigrating to Utah. Many men struggled to find female companionship and chose to hire prostitutes instead. In all, the existence of a city-supported red light district and prostitution activities challenged Utah’s otherwise button-down and pious reputation.

Utah Progressives, like reformers throughout the nation, attempted to use scientific research and regulation to control what they perceived as the Salt Lake City’s most pressing social ills.  Some of their reform efforts paid off, for example, with improvements in sanitation and even the creation of national parks and forests.  Others, like the attempt to confine prostitution to the west side, however, did not.  In all, Utah’s Progressive Era activities are typically late-nineteenth-century reform movements throughout the United States.  Some programs improved cities and life in general, while others failed.

We hope you join us for our next installment of Salt Lake West Side Stories where we will discuss how Salt Lake City’s last remaining pioneer square (beside Temple Square) was threatened by development and proposed as a memorial and the locale for the state history museum.

Do you want to read the next post? PROPOSED USES OF THE PARK AND URBAN RENEWAL

Contributors: A special thanks to Dr. Phillip Natoriani and Dr. Cassandra Clark for adding to the contents of this post.