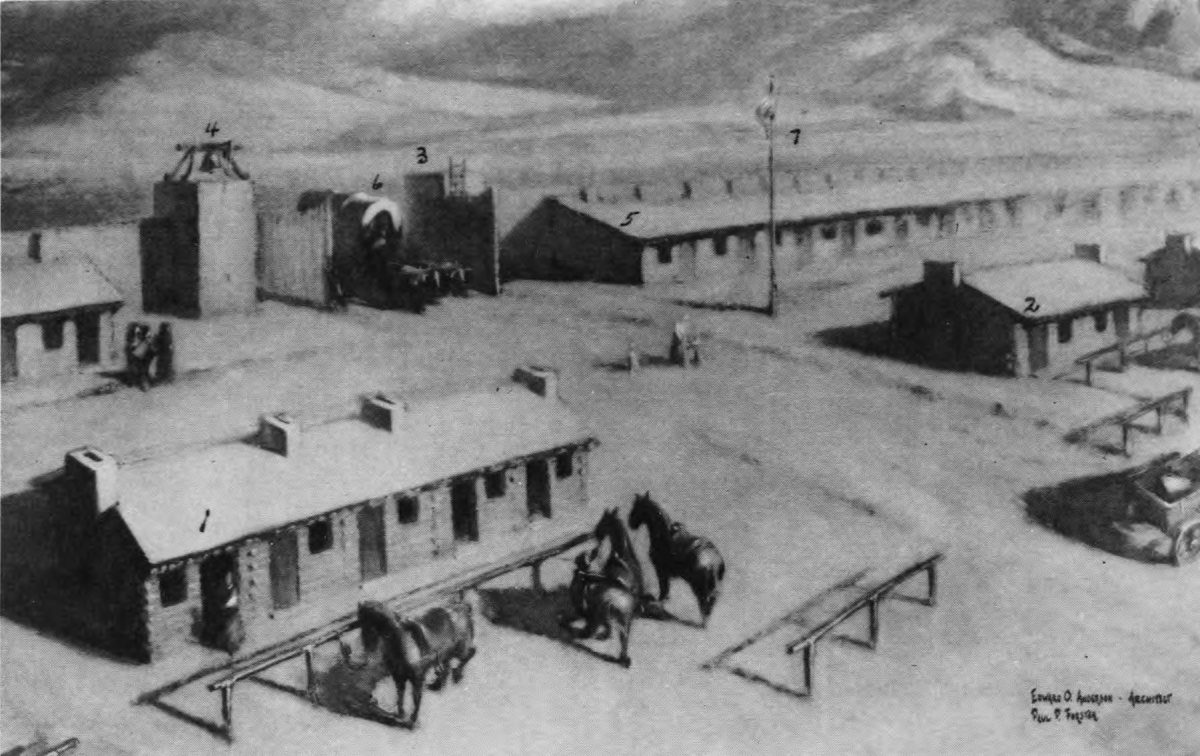 In the fall of 1847 and the summer of 1848, Mormon leadership decided to expand the perimeter of the Pioneer Fort to accommodate a flood of immigrants from the “the states” and from across the British Isles and Europe.

The plans for the expansion of the fort were both partially orderly and haphazard. Amid the Jordan River low grasslands, the Mormons built something of an island. The fort consisted of hundreds of cabins (an estimated 450 by late 1848) and thousands of corralled livestock.  It was surrounded by newly cleared, irrigated, and cultivated fields that would cover 2,000 acres across the valley in the spring of 1848. Later in its history, many artists depicted the fort ordered and symmetrical, lacking lived-in wagons, scattered provisions, adjacent cultivated fields or the numerous animal corrals. What a scene it must have been—this grand gathering of religious refugees which numbered about 2,000 individuals by late winter 1848!

The arrival of Mormon colonizers to the Salt Lake Valley must have perplexed and perhaps even alarmed the Native Americans who lived in the area. Utah ’s American Indian nations were used to interacting with white trappers and explorers who had moved through their lands and established trading posts. These European migrants rarely stayed in one area for long. However, the arrival of Mormon colonists, along with the construction of the fort, was different. Native groups watched as thousands of colonists (eventually they were called “Mormonee” by Native Americans) began plowing, building, exploring, and laying out what was both a near instant and permanent Euro-American city.  In general, the Native Americans reticently accepted or tolerated the new settlers, under a presumption that they would allow them to live their lives as before. Within two years, the fort grew from its original ten acres to some forty or forty-five acres. This continued expansion by Mormon settlers exacerbated tensions between white settlers and Native American peoples who still claimed the area as their homelands.

During their first two years living at the fort, Mormon Pioneers battled continuously with wildlife as they worked to establish their new home. On a daily basis, they faced an influx of wolves, foxes, cougars, and field mice, whose rangeland the pioneers had colonized. Mice were exceptionally troublesome as they burrowed or tunneled under their cabin’s dirt floors or often fell through their earthen or rough-hewed board ceilings making it difficult to sleep.

During their first two years living at the fort, Mormon Pioneers battled continuously with wildlife as they worked to establish their new home. On a daily basis, they faced an influx of wolves, foxes, cougars, and field mice, whose rangeland the pioneers had colonized. Mice were exceptionally troublesome as they burrowed or tunneled under their cabin’s dirt floors or often fell through their earthen or roughhewed board ceilings making it difficult to sleep. Some settlers reported killing up to fifty to sixty mice daily. The howling, growling, and nocturnal hunting of wolves, foxes, and cougars (also called catamounts) was also an unsettling nightly event.

Residents of the fort organized their populations into wards and stakes based on geographic boundaries, which are similar to the Catholic Church’s use of parishes and dioceses. They then formed a high council, and appointed bishops to govern the fort’s geographical wards. Mormon pioneers also constructed schools and a bowery made of logs, brush, and tree limbs, used for all public gatherings. Settlers participated in elections and voted for candidates pre-selected by LDS Church leaders. In fact, after the Mexican-American War resulted in the incorporation of the Great Basin into the United States, it was from within the fort that Mormon settlers petitioned the United States government for statehood or at least the establishment of a territorial government with boundaries extending across the greater Intermountain region and beyond.

On a raised mound one block east of the Pioneer Fort, residents established Salt Lake City’s first cemetery (now approximately Block 49, Plat A, 1847). Here they buried 33 individuals in three rows during the settlement’s earliest years. The first to be buried was three-year-old Milton Threlkel, who drowned in City Creek on August 11, 1847, only 20 days after the pioneers first arrived in the valley. Notably, LDS settlers chose to bury their dead over burial grounds previously used by the Fremont Culture people.  These ancient burial grounds dated back 700 to 1200 years. The cemetery became a resting spot for peoples representing multiple centuries who made their lives on and around City Creek. On May 30, 1987, the Block 49 Committee placed a marker on the site entitled, “Utah’s First Burial Site,” on the corner of 300 West and 300 South.

The Pioneers of 1847 were not the only migrants to call the fort home.  Those who arrived in 1848 also established their first homes within the fort’s boundaries. Essentially the fort was the initial base camp for the first settlements established across the Wasatch Front by members of the Church of Jesus Christ of Latter-day Saints. From this humble setting at Pioneer Square, some 70,000 Latter-day Saints migrated (representing dozens of nationalities) throughout the West, from Mexico to Canada, settling and resettling across what is now called the Mormon Culture Region. Pioneer Park represents the first large scale Euro-American settlement in the Great Basin. This is no small historical statement.

This near-instant Euro-American city was described on July 18, 1849 (nearly two years from the initial settlement) in a letter written by James E. Squire (Rochester Daily Advertiser, Rochester, New York, October 10, 1849) who stayed temporarily in Great Salt Lake City, before traveling to the California goldfields. The Fort at the Great Lake was not mentioned by Squire, as the well-planned Mormon city had, in the prior eighteen months, exploded into existence:

My dear friend—I have been laying at this famous city nearly two days, and although I have thought of you yet I have had too much on hand to write….

[Describing the city:] There is a kind of table land or bank about three miles in width, sloping from the base of the mountains to the valley. The city is situated immediately under this bank, and extends three miles west towards the Utah outlet [Jordon River], and is three miles north and south. The city is entirely fenced around, and is laid out in ten acre blocks, which are subdivided into lots of 1½ [actually 1 ¼] acres each. These lots are not all built upon, but the land is entirely cultivated. There are probably 500 houses, one story high, and small, and either built of logs or adobes. In looking over it from the mountains, it resembles a settlement of Irishmen around some public works—however, everyone is neat, comfortable, and in perfect order.

The citizens are orderly, well disposed, civil and intelligent. The streets are good, wide, and have generally a stream of water running down each side, coming from their irrigating works. The whole of the improved land is irrigated by the water coming from these caverns in the mountains. There is, I presume, 20 miles of ditch around and in the city for this purpose. The water is very pure, and conducted to every acre of ground in the city. They are just cutting wheat; it is a tolerable crop, pretty short straw but well filled. There are farms some distance [designated five and ten acre lots] from here that are said to raise from 30 to 36 bushels to the acre. Vegetation of all kinds is very thrifty and luxuriant, but still they cannot raise anything here without irrigation.

Mormon pioneers chose the Salt Lake’s west side as their home location during their initial years of settlement.  They accredited their move to the West as a rejection by the United States and intentionally decided to cross what most nineteenth-century citizens considered “Indian Country” to settle in the borderlands of Mexico.  They moved to the Great Basin following their conscience and to prepare quickly for an anticipated Second Coming of Christ.  They also believed that if they were to enter back into the Union, they would do so using popular sovereignty and self-determination. Their goal was to find a location that gave them the physical and religious space to establish their own unique theocratic government.

After the end of the Mexican American War in 1848, Mormon settlers found themselves once again on American soil.  Most US citizens and government leaders considered the Mormon lifestyle—particularly in the practice of the “peculiar institution” of polygamy—as the antithesis of 19th century American culture.  Generally, only those who were white, Protestant, monogamist, democratic, individualist, and interested in an open economy, generally qualified to be American. The Mormons, who were defiantly theocratic, polygamists, and espoused collectivist ideals (placing the theocratic good over the welfare of the individual), endured nearly 50 years of USA’s rejection before Congress granted Utah statehood. Only after many applications and denials and a long process of adaptation and doctrinal accommodation were Utahns granted statehood.

Utah’s population due to industrial development also became more diverse when statehood was finally granted. In many ways, members of the Church of Jesus Christ of Latter-day Saints never got over being treated so poorly by the United States—this from the 1830s in up-State New York to the 1890s in the Great Basin—leaving an enduring legacy of resentment and conflict with the federal government. Join us in our next Salt Lake West Side Story post where we will analyze the fort’s enduring legacy.

Related Activities: Seek out and read the pioneer cemetery monument entitled “Utah’s First Pioneer Burial Site,” located on the southwest corner of 300 West and 300 South. Do you want to know more about—in a brief chronological format—the story behind Utah’s fifty-year statehood setback, read History to Go “Struggle for Statehood Chronology?” Finally, if you want to read firsthand accounts describing the Great Salt Lake City as of 1849, some two years after the pioneers entered the Salt Lake Valley, see: https://babel.hathitrust.org/cgi/pt?id=uc1.31822035076900&view=1up&seq=12

Contributors: A special thanks to W. Randall Dixon, Kirk Hendrickson, Val Parrish, and Jenny Lund for contributing to the contents of this post.