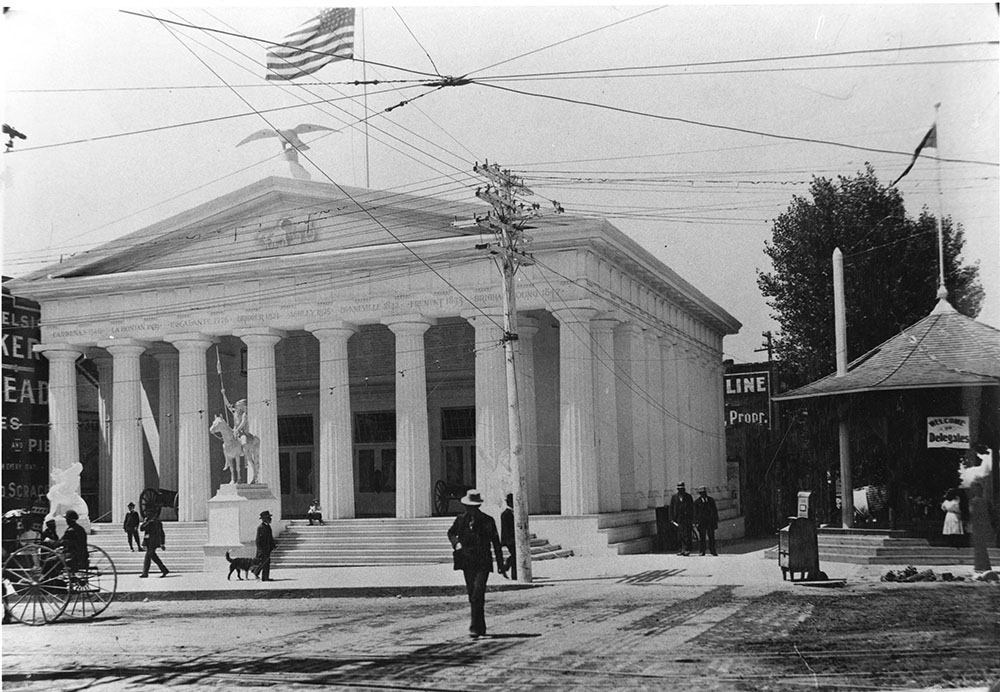 Above photo caption: Utah’s Hall of Relics, built as a small Parthenon replica. Note above the pediment is a smaller relica of Ralph Ramsey’s flying eagle sculpture (the original atop Brigham Young’s Eagle Gate). The hall, constructed of plaster and jute fiber over a wooden frame, was built for the 1897 Utah Pioneers’ 50th anniversary celebration.

Members of the Church of Jesus Christ of Latter-day Saints did not live in the Old Pioneer Fort for long. As early as the spring of 1849, just two years after Mormons began to colonize the Salt Lake valley, residents moved to lots, or “inheritances,” that church leaders assigned them.

Frequently people disassembled the fort cabins and moved them to their city lots. Others built log or adobe cabins, the latter from the clay deposits used to construct the partial fort wall. The move from the fort to the planned city marked a shift in what Mormons called the center of their city. Instead of the Pioneer Park neighborhood, Temple Square became the center of operations. At Temple Square, Mormons built a sizable open bowery and started plans for more permanent structures.  During their initial years in the Salt Lake Valley, members of the Church of Jesus Christ of Latter-day Saints expanded across the Salt Lake Valley to transform different areas to meet the needs of their growing immigrant population.

Not everyone moved from the fort to the new planned city. A small group of residents continued to live in the fort until spring 1851. In 1850, Church leaders directed all incoming immigrants to temporarily camp at what would eventually be called Union Square, which is now the site of Salt Lake City’s West High School (300 West 241 North). What remained of the Old Pioneer Fort was cleared in 1851, to make room for the expanding Mormon community. Over time the site for the Old Pioneer Fort underwent a rebranding of sorts as citizens and church leaders repurposed the space to meet their immediate needs. Some of the fort land remained open to settlers to use for grazing and gardening.

Today a ten-acre park is all that is left to commemorate the original forty-four-acre fort. The Pioneer Park, was dedicated as a public space during the city’s fiftieth-anniversary celebration in 1897.  Notably, in 1897, the west side looked dramatically different than it had fifty years prior, when Mormons first constructed their constantly expanding pioneer fort.  Salt Lake City, like most of the United States, had embraced post-Civil War industrialization, and businesses, laborers, and residents transformed the city’s west side from an extended pioneer fort, to individual lots to a transportation and industrial hub for the city and the valley.  SLC’s west side also experienced a dramatic demographic shift as immigrants from around the world moved into the working class Pioneer Park neighborhood.  By the late nineteenth century, the community was diverse and also an area well-known for its industry, its manufacturing businesses and for its poverty.  Those who lived there were primarily non-Mormon immigrant pioneers from Greece, Italy, Japan, Mexico, and a growing number of African Americans.

In 1898, two years after Utah gained statehood, state, city, and LDS Church leaders worked together to secure a Mormon pioneer identity for the old pioneer fort location. That year, the city dedicated the ten-acre block by naming it “Pioneer Park” focusing on the arrival of Mormon pioneers in 1847.  As previously mentioned, the original “Fort on the Great Salt Lake” had grown to over forty acres by 1849, but by 1898 it had shrunk to a tidy ten-acre block.  In 1947 the city once again recognized the park during the state’s pioneer centennial celebrations. Of course, Mormon settlers were only the first of the scores of different pioneers who moved into the neighborhood during the nineteenth and early twentieth centuries. However, many leaders and most Utahns chose to focus on the Mormon legacy as a point of reference for the park. It would not be until later that historians worked to record a more inclusive history. During the 1940s and 1950s, the park became a place where city, state, and church leaders chose to tell, not only a Mormon settlement story, but also a broader narrative about American westward expansion, lawmaking, economic development, and to memorialize the whole colonization of the West.

During the 1940s and 1950s, the park became a place where city, state, and church leaders chose to tell, not only a Mormon settlement story, but also a broader narrative about American westward expansion, lawmaking, economic development, and to memorialize the whole colonization of the West.

These calls by state, city and LDS Church leaders before and after the park’s dedication in 1897 occurred as the west side was experiencing a massive transition from predominantly Mormon and agricultural based to industrialized and non-Mormon neighborhood. The transition to urban and a more diverse population increased during the Great Depression and onward. Also by the mid-20th century, Salt Lake City’s prevailing historical and social narratives changed from that of “Mormon city” to a quintessential American urban area and more subtly to a “white” city. The history of the Pioneer Park reflects these identity shifts. To SLC majority population the park and neighborhood represented a baffling combination ethnicity and racial diversity, constant poverty and a place of changing industrial uses, thus making it one of city’s most eligible places for urban renewal. In essence, throughout its most of its history, the park and its neighborhood has been a contested space, especially at efforts to memorialize the Pioneer Park.

By the 20th Century, the west side’s inhabitants and its architecture represented a myriad of traditions and cultures inspired by its diverse residents. Those who lived and worked on the west side came from differing ethnic, racial, and socioeconomic backgrounds. For example, the lavish Staines-Jennings Mansion, or Deveraux House, still stands at 334 West South Temple Street. Built between 1855 and 1857 and remodeled from 1882 to 1885, Utah horticulturalist William Stains and architect William Paul, designed Salt Lake’s first mansion using then-popular English inspired Gothic Revival style (both in its architecture and landscape design). Paul designed the garden based on the published works of preeminent American landscape architect Andrew Jackson Downing. In the mid-1880s, the cottage and gardens were sold to Salt Lake City’s first millionaire Williams Jennings, who transformed the house into a much larger mansion following the then fashionable Second Empire style.

Like the park’s changing identity, the mansion also adapted to the city’s ever-changing environment. After falling on harder times during the first half of the 20th century, the small mansion functioned as a longtime west side boarding house. Well known Salt Lake businessmen Izzy J. Wagner, tells a story of one unnamed boarding house lodger, who distilled and sold his liquor from an upper room in the mansion, this during the era Prohibition (1920-1933). Wagner’s aunt, Ehtal Yuddin, who leased and sublet rooms in the mansion, lost her lease on the mansion after her bootlegger renter’s moonshine still blew a hole through the mansion’s roof.

Of course, the Staines-Jennings Mansion is hardly representative of the majority of the West Side’s early dwellings.  The majority of its first inhabitants lived in small log or adobe cabins, amid gardens and orchards, which were gradually added to, or removed or demolished to accommodate changing circumstances. Not all of these earliest of cabins were lost. The Osmyn M. and William H. Deuel cabin, built within the pioneer fort in 1847, is now preserved and enshrined in a memorial plaza located between the LDS Church’s Family History Library and the Church History Museum (35 N. West Temple Street).

In 1849 the cabin was placed on skids and pulled from Pioneer Park to a residential lot on West Temple and 100 North. It was then taken down and featured in a museum setting until it was later installed on Temple Square, where it was fenced and preserved under a Neoclassical canopy. Finally, after being stored away for a short time, in the mid-1980s, it was installed in its current location, on an LDS Church-owned plaza looking directly into Temple Square.

Today the cabin stands as one of Utah’s grand symbolic Mormon immigrant relics. For many visitors, the dwelling represents the sacrifice, perseverance, and faith of the original Mormon pioneers.  It also serves as an object of stark contrast to the wondrous civilization the descendants of Utah’s revered pioneers built around it. The Deuel cabin, which was moved around in time and space for over 170 years, is also the Pioneer Fort and Park’s most prized and disconnected artifact.

Join us for our next installment of Salt Lake West Side Stories where we will discuss the arrival of the railroad and some of the early visitors to Salt Lake City’s west Side.

Do you want to read the next post (Post 8)? OVERLAND TRAVELERS, EARLY VISITORS, AND THE COMING OF THE RAILROAD.

Related Activity: Go and visit the Deuel Cabin located at 35 North West Temple Street which has been preserved and interpreted by the Church History Library of the Church of Jesus Christ of Latter-day Saints. When you arrive try going inside and read the information provided about the cabin and its original owners. We also recommend that you visit Salt Lake City’s Daughters of Utah Pioneers (DUP) Museum located at 300 North Main Street. The museum opened its doors in 1950. The facility is a mid-20th century attempt at a modern version of the Salt Lake Theater (completed in 1861), which had been razed in the 1920s followed by much lingering regret. The museum from top to bottom is filled with what the DUP describes as “relics” of the pioneers up to approximately 1900.

See our Additional Readings page for a complete list of works.