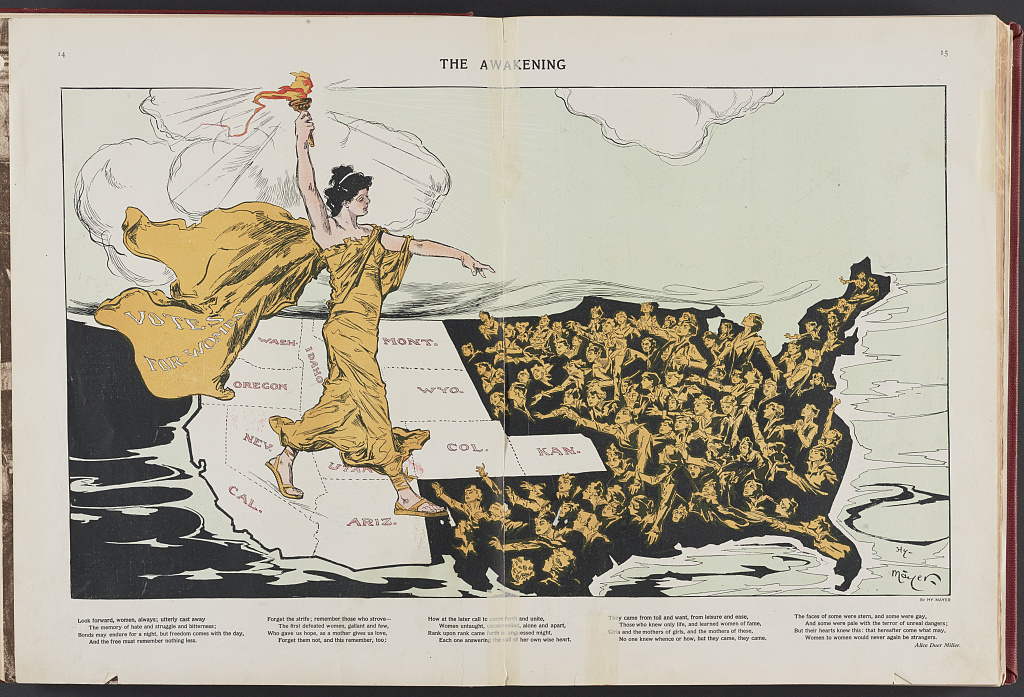 10.28.2020 (Season 2: Episode 5) Speak Your Piece podcast. Above illustration “The Awakening” by Hy Mayer, showing a torch-bearing female symbolizing the awakening of the nation’s women to the desire for suffrage, with the West in advance of the nation (New York : Puck Publishing, 1915 February 20). Courtesy of The Library of Congress.

Podcast Info: Neylan’s book is “a shot across the bow,” with the intent of urging historians–and the American public–to include women’s history from the interior West.

In this 100th anniversary year (the 19th Amendment’s centennial) Utah, Colorado, Wyoming, and Idaho had little mention in the anniversary’s most prominent publications and celebrations. What Southwestern historian Sandra L Myres (1933-1991) stated decades ago, in many respects still applies in 2020: “…most women’s suffrage and feminist historians have almost entirely ignored the West.” Neylan McBaine’s book constructively and persuasively seeks to change this.

An example of this neglect is the PBS American Experience documentary The Vote (which was a wonderful documentary otherwise) mentions the interior West but a few times and makes no mention of the complex, very strong, women’s movement in Utah, which included the first woman in the country to vote under an equal suffrage law (Seraph Young, 1870).

This story is just the tip of the iceberg as Utah, Wyoming, Idaho and Colorado made vital contributions, not only to their local movements, but also to the broader national story.  McBaine uses some fiction in this otherwise history, to make this multi-level and muliti-territorial (or state) story come to life.

Only a few of the topic discussed by Neylan with senior public historian Brad Westwood include: (1) Utah’s unique web of circumstances which created a strong women’s movement: the existence of polygamy, the statewide organization of the LDS Church’s Women’s Relief Society, Utah’s strong women’s directed journalism, the LDS Church’s call for professional education among select women, and women’s strong involvement in Utah’s economy; (2) the story of the Rocky Mountain Suffrage Convention held in Salt Lake City in 1895; (3) the stories (among a dozen other women) of Charlotte Godbe Kirby, who hosting Susan B. Anthony and Elizabeth Cady Stanton during their 1871 visit to SLC and later became a national anti-polygamist speaker, and Jennie Anderson Froiseth, editor of Utah’s Anti-Polygamy Standard newspaper; and (4) how one of Mormonism’s greatest intellectuals B. H. Roberts (in the Utah Constitutional Convention), so vehemently opposed women’s suffrage that he produced a fraudulent petition in his attempt to win the day.

Bio: Neylan McBaine, until just recently, served as both founder and CEO of Better Days 2020, a Utah non-profit organization, created with the intent of popularizing women’s history through education, legislation, events and the arts. Neylan and Better Days 2020 also created a women making Utah history site that we urge you also explore. Neylan is a leader in speaking and writing about women’s leadership and the U.S. Suffrage Movement, with a specific focus on Utah and the West. She has written other books including How to Be a Twenty-First Century Pioneer Woman (2008). Neylan is also the founder and editor-in-chief of the Mormon Women Project. (photo credit: Chelsie Starley)

Recommended Readings: To purchase a copy of Pioneering the Vote: The Untold Story of Suffragists in Utah and the West, go to Shadow Mountain Publications. We also urge that you find a copy of Neylan’s book in your local public library

See also the NPR Radio video clip and article “Power Of The Past: Retelling Utah’s Suffragist History To Empower Modern Women” about Utah and Neylan McBaine.