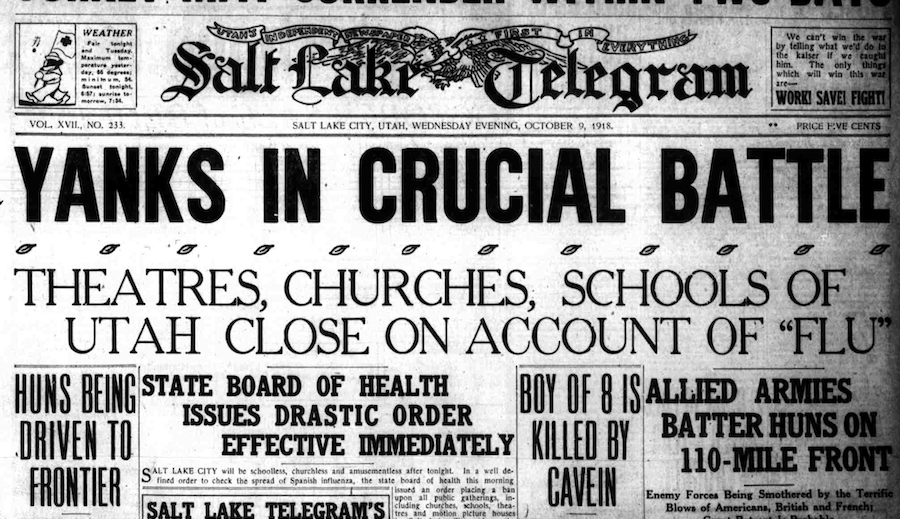 In episode 14 of the “Speak Your Piece” podcast, Senior Historian Brad Westwood interviews Dr. Holly George about her work on topics such as theater in Washington state and the history of the Spanish Flu.

Perhaps the most poignant part of the interview — as well as the most timely — is when Dr. George talks about the death of her great, great grandmother in 1919.

…the sorrow of the influenza pandemic traveled with my father’s family for much of the mid-twentieth century. My great, great grandmother, Gladys Graghead Buck was as expecting mother during the winter of 1918. Then in January 1919, at eighteen years old and only three days after the birth of her first child, Buck died in Smithfield, [Cache County,] Utah, from influenza and pneumonia. Her death–at a great physical distance from the battlefield of WWI—was yet one of the millions of tragedies of a war that affected lives across the globe and ushered in a new phase of modernity.

From the Summer 2018 edition of the Utah Historical Quarterly

In researching the death of her “sweetie” Gladys, as Dr. George calls her relative, she also found other notices of younger people who died in Cache County from influenza that same week. The impacts on her family were also significant, and lasted for decades.

The Summer 2018 issue examines the pandemic’s impact in Utah as part of a broader look at how World War 1 changed the state.