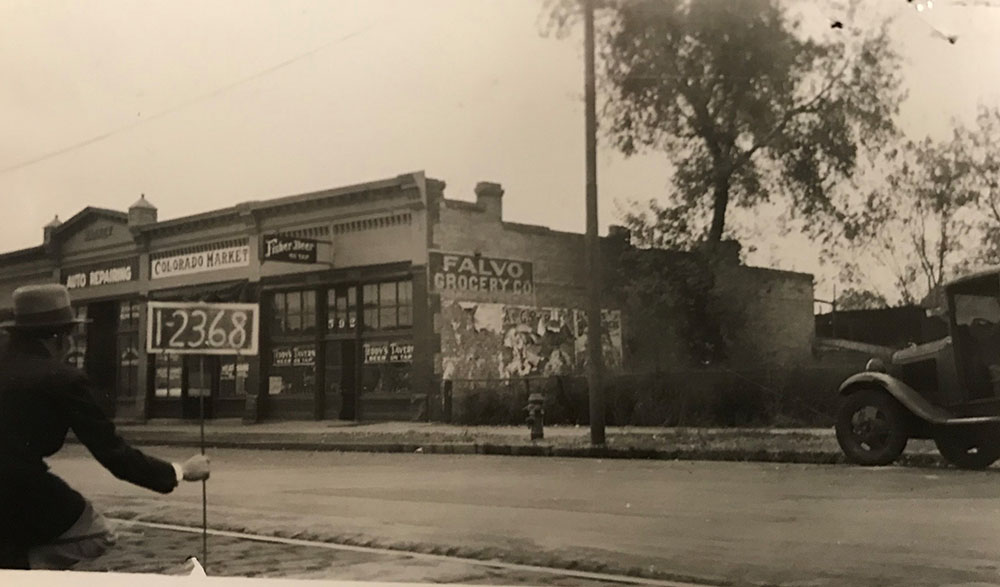 The arrival of later economic immigrants, from across the United States and around the globe, to Utah and the Pioneer Park nieghborhood, created conflicts with the Mormon Church’s all-encompassing societal ideal.

Salt Lake City’s west side was considered one of the poorest and rowdiest neighborhoods in the Salt Lake Valley. With a large population of immigrants who lived alongside transportation hubs, industries and businesses, it is no surprise that the west side was a busy and impoverished area. Over the years, the Pioneer Park neighborhood also became a place for immigrants to develop a sense of community, economic autonomy, and establish a footing on their path toward citizenship.

Utah’s railroad and industrial sector became a “pull factor” that drew in tens of thousands of economic immigrants to Salt Lake Valley, the Wasatch Front and to the Great Basin. Once they arrived, these new pioneers found themselves in the middle of a culture that was, in many respects, very different than any other region in the American West. Within the Territory of Utah, and especially in Salt Lake City, the Church of Jesus Christ of Latter-day Saints had shaped and dominated the political and social culture. When these other pioneers pressed to follow national political, social and economic trends, the LDS Church resisted these changes, at first, insistent on maintaining their unique theocratic, one culture, stronghold.

Gradually however, these diverse and varied economic immigrants, made up of thousands of industrial labors, shopkeepers, business people, investors and industrialists, brought with them networks of capitalism, investments, industry, retail goods and information which gradually changed Utah economically. What did not change was the Mormons yearning for a world, a physical setting, that mirrored and alligned with their ideals. Gradually this meant that many members of the Church of Jesus Christ of Latter-day Saints almost imperceptibly over the course of the twentieth century, moved and gather elsewhere, beyond the center city.

The west side’s predominantly non-Mormon and international population found that the majority of Utah’s citizens tolerated their existence in their city rather than accepted them as equals. Historian Phillip F. Notarianni observed that Utahns “have always been highly ambivalent about how much they value people from other cultures” they have also debated “about whether diversity is a strength or weakness.” Because of the love and dedication in telling the Mormon story in Utah, Utah’s diverse non-Mormon immigrant experience has frequently been undervalued or ignored. Thankfully, during the last fifty years historians including Helen Papanikolas, Philip Notarianni, Ronald Coleman, Larry Gerlach, Greg Thompson, Michael Homer, Greg Smoak, Jeffrey Nicholas, Jorge Iber, Benjamin Cater, Eileen Hallet Stone, Leslie G. Kelen, and many others, have worked to uncover the experience of Utah’s minorities and people of color, and develop a more expansive and all inclusive history for Utah.

Because most of Utah’s immigrants and people of color faced hostility or ambivalence upon their arrival and thereafter, many eventually moved out of the state to find a better life elsewhere. These immigrants and people of color who moved out, did so during the numerous economic recessions throughout nineteenth- and early twentieth-centuries, and most particularly during the Great Depression (in Utah, this stretched out from 1930 to the beginning of World War II). In each of these cases, specific corporations or whole industries downsized or collapsed. When new and equal waged employment opportunities were not available to these people, many of Utah’s very established, hard working immigrants, moved on.

Those immigrants who remained in Salt Lake City continued to face discrimination while finding ways to influence the city’s and the state’s political, social, religious, and economic culture. Some worked alone using sheer will and determination to motivate them.  Others joined benevolent societies, labor unions, and religious organizations. Still, others benefited from national movements that pushed for tolerance and equality for all races, ethnicities, and nationalities. For example, during the 1960s, many of Utah’s minorities supported and participated in local Civil Rights demonstrations. Many joined highly visable regional events, including Utah’s annual Pioneer Day parade and celebrations, to stake out their long standing claims to Utah. In all, immigrants who lived and worked in Utah found ways to make their voices heard and enact change.

Salt Lake City’s Pioneer Park neighborhood for over a hundred years (1869 to the 1970s) was the region’s largest international or ethnic community. The west side had economic and cultural ties to dozens of smaller immigrant populations across Utah and the American West. For instance, locally, the city of Magna had a Japan Town and a Little Italy. Murray, a small smelting town located eight miles south of Salt Lake City, and Midvale, also a smelting town, found 11.5 miles south of SLC, housed communities of Serbians, Croatians, Slovenes, and Swedish peoples. Bingham and its neighboring towns (Highland Boy, Frisco, Markham, and FrogTown) had over a dozen enclaves of immigrant populations. Finally, Milford, Park City,  Mercur, Eureka, and Helper also became home to diverse groups, including Chinese, Greek and Italian immigrants, among others, all with community and economic ties to Salt Lake City, and most particularly to the Pioneer Park nieghborhood.

Many services and organizations, including consulate offices, foreign bank branches, churches, hotels and mutual aid societies serviced as community centers for both Salt Lake communities and for the many immigrant communities spread far and wide. Cafes, taverns, churches, language schools, and immigrant-owned stores were regional gathering places for social, economic and religious activities, and to strengthen cultural ties. Today, most of the nineteenth- and early twentieth-century immigrant-built or used neighborhoods have been destroyed. Or if they have survived, they have been converted to other uses. In either case, their prior immigrant identities have been largely forgotten.

Many services and organizations, like churches and mutual aid societies that provided aid to Salt Lake’s working-class, often became the heart of immigrant communities.

Salt Lake City’s west side has undergone dramatic changes since the mid 1800s. As a result, only small traces of these once-thriving micro-communities are still detectable today. Examples include twenty or more warehouses, a dozen commercial buildings, two or three partial streetscapes, a few apartment blocks and hotels, and a handful of back alleys. It is important that Salt Lake City citizens work together to re-identify and preserve these remaining streetcapes and structures as the Pioneer Park neighborhood and Salt Lake City in general undergos constant redevelpment.

In our next installment of Salt Lake West Side Stories, we will learn about the British, Cornish, Irish, and the Jewish American people who called the west side their home.