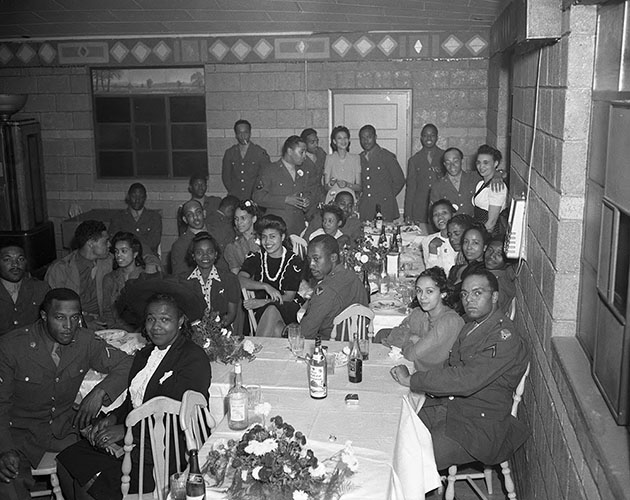 African Americans contributed to Utah’s religious, social, and cultural heritage. Despite the severe obstacles they faced, African Americans living in the West Side established churches, obtained employment, owned businesses, and served the citizens of their state and nation by serving in the armed forces.

Many African American Utahns were congregants of a number of religious organizations. Utah’s African American churches had their beginnings in the Pioneer Park neighborhood. The Trinity African Methodist Episcopal Church, located at 500 West and 600 South, opened its doors to followers in 1891. The Calvary Baptist Church also served African American followers. Congregates originally occupied a building located on 202 South and 300 West that was previously known as the First Baptist Church. In the late nineteenth and early twentieth centuries, the community had two fairly well-circulated African American newspapers, the Utah Plain Dealer and the Broad Ax, along with three or four smaller papers, all produced between 1890 and 1920.

African American Utahns faced severe discrimination as they lived and worked in the state. One of the most prominent threats to blacks was the presence of two Ku Klux Klan chapters. Formed a year after the end of the Civil War (1861–1865), the first Ku Klux Klan (KKK) terrorized freed slaves living in the South until the Federal Government worked to investigate and prosecute KKK members. The second KKK emerged in 1915 in response to increased levels of immigration, and changes in cultural norms that many whites believed threatened the American way of life. In short, Klan members organized in support of white supremacy. It is important to note that between 1892 and 1954 twelve million immigrants came to the United States through Ellis Island (New York) alone. Their arrival in America along with growing support for scientific race theories including social Darwinism and Eugenics contributed to the widespread support of the second KKK.

The second KKK was equally if not more violent, and often operated under a cloak of secrecy. Like the first KKK, the second Klan targeted African Americans. Clan members also targeted Italians, Native Americans, Jews, Japanese, Chinese, Syrians, Greeks, and Mexicans. The KKK wanted to make immigrants of color, as well as Catholics, Jews, homosexuals, feminists and communists, to feel suppressed and powerless. All of these groups had populations in Utah. The general tolerance and the existence of the KKK served as a social barometer for what Utah society would tolerate or quietly condone.

The second KKK drew members and promoted their ideas by fixating on patriotism and stressing the importance of holding fast to what they considered were American “values.” The second KKK also pushed against organized labor protests, which, as far as Utah was concerned, appealed to members of the state and government who held very strong anti-union positions. It was presumed that Utah’s strong anti-labor position would translate into equally as strong anti-immigration sentiment. To a limited degree this proved true. In 1915 Utah had also executed, with much national attention, the well-known immigrant, union organizer and troubadour Joe Hill.

Utahn’s, like many other American citizens, struggled to adapt to the dramatic transformations that the United States underwent during the early Twentieth Century.  The corporatization of agriculture along with the growth and influence of urban culture (including the presumed lessening of morals, ready access to alcohol, speakeasies, pool halls, dance halls and explosive interest in Jazz music), and the massive industrialization of Utah’s economy, challenged and terrified many Utahns, and threatened the predominantly white dominant culture.

The second KKK promised to combat the changes that so many whites feared, and their promises appealed to many Utahns. These Utahns felt, wrongly, that the influx of immigrants was the main reason for their loss of economic and social power.  The KKK’s support of white supremacy, their “one hundred percent Americanism” campaign, their anti-immigration and their anti-union stances made these Utahns believe this movement would reestablish economic and social power.

During the 1920s numerous KKK chapters sprang up in Utah. As historian Larry Gerlach described, the Klan was most active in Salt Lake County, Logan, Ogden, Provo, Helper, and Price, where anti-Mormon politics and nativism attracted members. Although many Americans continued to believe that members of the Church of Jesus Christ of Latter-day Saints were neither Protestant or Christian and questioned member’s loyalty to America, many members of the LDS Church were suspects to this clandestine national movement. Officially the LDS Church, repelled by the KKKs violence and secretiveness, actively opposed the group in Utah. Notwithstanding this, many Mormons still joined. Gerlach estimated that Salt Lake City’s active supporters in the mid-1920s were 2,500 strong.

During a George Washington birthday celebration held on President’s Day in 1925, Klansmen paraded unmolested through Salt Lake City’s central business district. They concluded their march by placing a large blazing cross on Ensign Peak which people in the city and beyond could easily see. It was a perverse use of this religious and cultural site, as the summit had and continues to have a symbolic biblical meaning. A flag had been flown on Ensign Peak not long after the Utah pioneers arrived in 1847, with the expressed purpose of fulfilling a biblical prophecy to call all the Mormon faithful to gather before the anticipated Second Coming of Jesus Christ. By placing the burning cross on the same peak, the KKK appropriated the spot for their white supremacist message.

Later that year, a KKK induction ceremony began with a guard line of hooded Klansman on horseback standing in a mile-wide circle below Ensign Peak. These hooded figures had lit several burning crosses and placed them along the mountainside. This public induction ceremony demonstrates the KKK’s ability to actively campaign in Salt Lake City as well as its influence on citizens who participated in the ceremony. However, the KKK did not survive for long in Salt Lake City. While some people continued to support KKK agendas, a combination of conditions prevented the organization’s growth in Utah. Opposition by LDS leadership, a large population of socially and economically engaged immigrants, and resistance from local government officials in Logan, Ogden, and Salt Lake City, prevented the KKK from establishing a stronghold in the state.

Nevertheless, the membership drive and the community tolerance of the hate group reveals something about the complex racial attitudes that existed in Salt Lake City and Utah. These historical events offer a lens into the social, cultural, and political obstacles that African Americans constantly faced living in Utah.

Jim Crow-like segregation did exist in Salt Lake City. African Americans could not, as was the case elsewhere across the United States, conduct themselves freely without some kind of racial, housing and economic restrictions, as whites did–or those immigrants who could pass as white did–in Salt Lake City. In 1939, in the wake of an expanding African American population and economic influence, alarmed Salt Lakers, with a thousand signatures in-hand, petition city government and the Utah legislature to study the possible creation of a “negro district” within downtown Salt Lake City. The general area proposed was somewhere between 5th South and 9th South and Main Street to 15th East. The negro district proposal was led by longtime Mormon bishop Sheldon R. Brewster, who would in two years’ time, serve as a member, and later as Speaker of the House, in Utah’s House of Representatives (Salt Lake Telegram, Nov. 17, 1939). Fortunately for Salt Lake City, the “negro district” proposal did not carry the day.

The Pioneer Park neighborhood was one of the few places in the twentieth-century city where African Americans could rent or own property. This included other areas of the poor inner-city that were free from racially motivated mortgage covenants and “redlining.” “Redlining” did occur in different areas and this approach prevented African Americans, and often other minority groups, from purchasing real estate or seeking out banking services. It was as if the greater society and especially Utah’s banking and financial services said, “We’ll allow you to go only this far in our city.” These federally condoned practices continued in Utah and across the United States until the Civil Rights Act was passed by the U.S. Congress in 1964. Utah was inescapably part of and expressed the same cultural bias and attitudes, encountered elsewhere in the United States.

Long before the spring of 1956, African Americans benefited from Victor H. or Alma Green’s Negro Travelers’ Green Book to find safe places to stay, eat and visit as they traveled. The 1956 Green Book listed four hotels in Salt Lake City with three located on the West Side. Jenkins Hotel sat on 250 W. South Temple, the Sam Sneed hotel located next to the Jenkins, and the St. Lewis Hotel was located up the street on 242 W. South Temple. The fourth place was the YMCA, located at 306 East 300 South. The Young Men’s Christian Association was by this time (not so much before) sympathetic and generally non-discriminating regarding their lodger’s ethnicity, race, or religion. To show the insensitive attitude and deep bias that prevailed in Salt Lake City far into the twentieth century, a small restaurant chain, known as the Coon Chicken Inn, originated in Salt Lake in 1925 and remained open until 1957. Its combination sign and doorway had customers enter through a grotesque caricature of an African American mouth.

African Americans participated in a number of community organizations, clubs, and events. During the 1930s and 40s, blacks joined a young men’s boxing program held at the Rotary Club for Boys located on 100 South between 500 and 600 West. In 1985, William Price, a middle-aged African American man, shared his experience as a member of the boxing club.  He recalled that it was mainly a peer-directed program that consisted of African Americans, Greeks, Italians, Mexican Americans, and poor white teenage participants. Price said that the club was a safe and non-discriminatory setting where most, if not all of the participants were challenged to be their very best both physically and otherwise. Price’s reflections indicate that under the noses of a largely xenophobic and racist Salt Lake City community (or at least one that did not counter this enduring bane of American society) boys from Salt Lake City’s ethnically diverse and low-income west side found acceptance in a club that to Price felt “like a large family.”

Many African Americans joined with other marginalized people to call Salt Lake City’s west side home. Despite discrimination and racist ideologies, African Americans worked and contributed to the cultural make-up of Utah.

We hope you will continue to read, learn and consider the next post in Salt Lake City’s West Side Stories which addresses Italian and Greek immigrants who settled first in the Pioneer Park neighborhood.

Would you like to read the next post? Immigrants from Eastern and Southern Europe and Salt Lake City’s West Side

Related Activities: Watch the Smithsonian channel’s documentary The Green Book: Guide to Freedom (2020) and read Christine Cooper-Rompato’s Utah Historical Quarterly article (Winter 2020 Vol. 86 No. 1) “Utah in the Green Book.” Also listen to the podcast interview with Reverend France A. Davis, pastor emeritus of the Salt Lake City’s Calvary Baptist Church. See Speak Your Piece: A Podcast about Utah’s History. In this interview, Davis reflects on over a half-century of service to Utah, and to his African American congregants. A keen observer and a student of Utah’s history, Davis has many insights regarding race, and race relations in 20th century Utah.

Contributors: Special thanks to Dr. Ronald Coleman, Will Bagley and Dr. Cassandra Clark for contributing to this post.